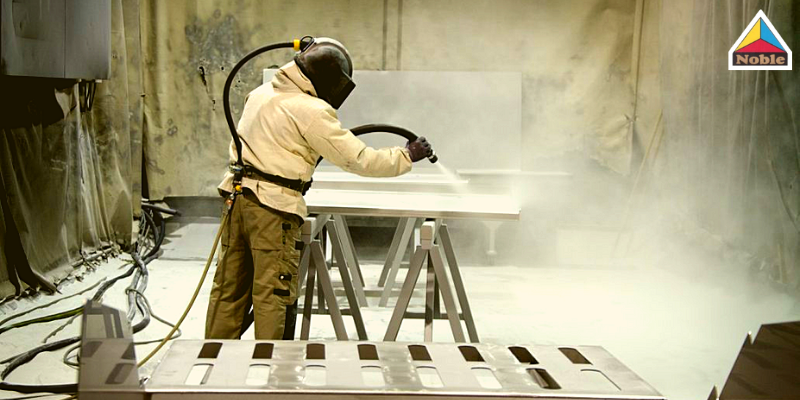 What Is Sandblasting? Learn Everything About It!

Before any metal can be powder-coated, it must be sand-blasted. Sandblasting is one of the most efficient ways to shape, strip, or smooth the surface of any metal. It is the same as rubbing something down with sandpaper, but it gives a more even surface, including in the nooks and crannies. Sandblasting is similar to high-octane sandpaper.

It uses compressed air to send dust and sand towards an object to remove the oil, rust, and old paint. The shape and style of the sandblast particles will change based upon the size, shape, and metal of the object.

What Is Metal Sandblasting?

As the name suggests, sandblasting is the process of using sand to make a metal surface for adhesion, bonding, molding, painting, or any other additional coating operation. It is also used to give a specific texture on the metal surface.

Want to learn more about sandblasting? Great! Because in today’s blog post, we are going to take a closer look at sandblasting and going to discuss some ways you may benefit from this service.

Sandblasting is often used as a part of the finishing process, removing materials from the object to prepare its surface for coating. But what are the benefits of sandblasting certain objects or products before putting on the finishing with powder coating? Here are some advantages of using sandblasting services for your business.

One of the reasons why sandblasting is an important part of the finishing process isn’t just because it smooths the surface of the object. It cleans the surface too. Sandblasting services are a great way to remove rust, oil, and harmful contaminants from almost any kind of surface.

Sandblasting cleans and smooths objects for quick and efficient finishing. This makes cleaning tough surfaces like metal easier, which saves on time and money.

When an object has old paint covering it, sandblasting can quickly remove the paint at a high speed. This makes the object ready for a new coating of paint.

Sandblasting is a colloquial term that refers mainly to abrasive blasting. It is a process that uses a particular type of material for a particular abrasive result. A smooth material like corn cobs or walnut peels is meant for softer compression results and a soft layer like wooden structures and thin metal surface.

Here in this blog, we have some different types of sand-blasting methods which are listed below:

Silica sand is also called silicon dioxide, which is ordinary sand that is commonly used for shearing or scraping a surface. It is called silica or quartz, which was commonly used to remove surface impurities and give it a clean look because it consists of sharp edges that give it a grit effect in abrasive blasting.

Soda sandblasting gives a clean and effective result without damaging the layer because it does not damage the outer layer of softer metals like aluminous or react chemically with its surface. Therefore, it is extensively used to remove rust from metals.

The steel method is utilized for both blasting and scraping. In this process, steel grit is utilized as an abrasive cutting media to clean off corrosion and rust from the hard metal surfaces. It has a fast cutting effect which can be efficient for the thick surface.

Glass beads are silica free and environmentally safe. They can be used in many areas to remove surface imperfections like rust, burrs, scales, and more.

In this blog, we tried to give you some detailed information associated with the question, “What is sandblasting”. In this effort, we explain a detailed approach. We hope you will find this blog interesting. If you are in the Sharjah, U.A.E area and looking for metal coating services – Sand-Blasting, Powder Coating, Electro Galvanizing, Electro Plating, Tin Plating, and more then, contact Noble Metal Coating. We love taking custom projects and helping them to achieve all of your metal coating feats. View our services and contact us today to learn more.

Thank you for explaining that sandblasting is excellent as a finishing process prior to having the surface coated. I also never knew that there are different types of sandblasting, such as steel sandblasting. The other day my brother asked what sort of process will be excellent to clean off erosion from his steel gate. I will propose this method for him to consider when I speak with him later today.